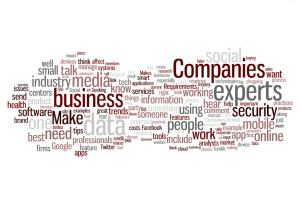 2012 is gone and there are plenty of entertaining and profound retrospectives from Google’s Zeitgeist 2012 to your very own Facebook year in review. But it is much more interesting to look ahead and anticipate where the market will go based on the trajectory established in late 2012.  Therefore we have performed some deep textual analytics, data mining and business intelligence operations on forward looking data sets to arrive at the following conclusions.

In closing, the image above is a word cloud that highlights terms from forward looking technology queries posed by journalists looking for help writing their stories.  It covers December, 2012 and more than 7600 words.  If the news is to be believed, 2013 will be a year where business has a deep need for expertise, data, security, people who can execute (make) and information is at the heart of it all.  There is also a proliferation of smaller topics that form a milieu rather than remain on the periphery.  Taken all together, 2013 will be a year of learning to use what we have to drive insight we have always suspected was there.  Cheers!